EXP SoundBoard is as bare bones as a soundboard can get. You can add audio files to the list of clips and assign hotkeys to each audio file. Sound files can also be played back by hitting the play button on the menu. You can also select which output device you want to play the audio through in the drop down menu.

If you want to use EXP SoundBoard in Discord, you’ll need a virtual audio device. You can learn where to get one and how to configure it for Discord in the whole section.

So far, we have only talked about soundboards that work through your audio input _ you have to be online and operating the board for your sounds to work. But what if you wanted to make your soundboards available to everyone on the server and at all times? In that case, you’d use a soundboard bot.

SoundBoard bit sit in your Discord sever’s voice Channel and can be programmed to play sounds in response to chat commands. Opening up your soundboard to the whole server enhances interactivity and promotes user engagement.

Blerp is an online sound sharing platform that you can integrate into your channel through its bot. It allows you to choose from their huge collection of over one million sound bites. If it’s a meme, it’s already available on their servers_ all you have to do is search for it. You can also upload your own sound clips to the Blerp servers through their website.

RickBot is one of the most popular Discord bots around. As you have probably guessed by the name, it’s an all-purpose meme bot that you can use to share GIFs, clips and soundbites in Discord. It Also supports custom soundboards that you can manage on the RickBot dashboard. The developers are recently released an update that allows a for RickBot to play Spotify play lists so you can curate your servers soundtrack.

Of All the bots on this list, the aptly named soundboard Bot is the only that functions purely as a soundboard. Unlike Blerp or RickBot, it isn’t controlled via chat command. Instead, you manage it via its Web application or its Android app.

A virtual audio device essentially acts as an audio channel or track. You can route sounds through separate virtual devices so they play through different applications. For example, you can have music playing to your Discord Server while audio from a film is sent to your Team speak.

Here, we are going to use virtual audio device to route both your soundboard and your mic to Discord. This way, you can speak on your mic while playing sound from your bored at the same time. This technique is the only way to get some soundboard app to play audio to discord. 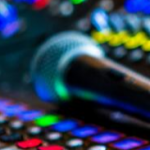